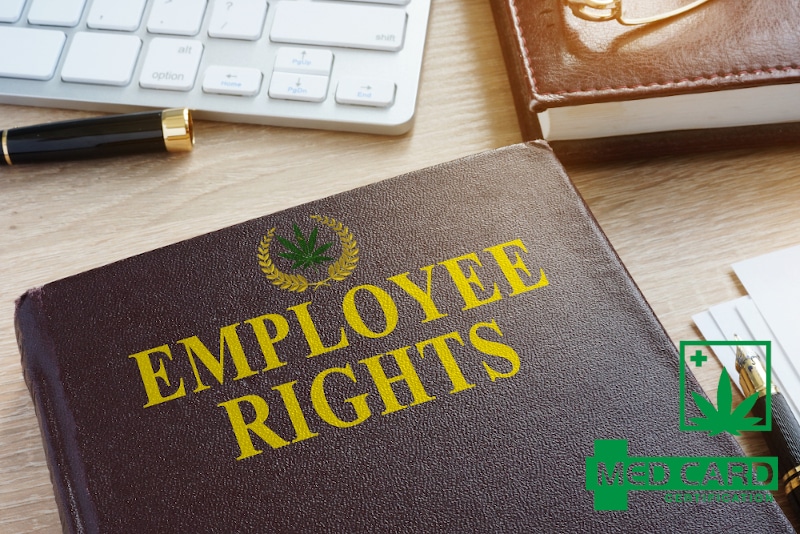 Of all of the issues faced by medical marijuana patients, the most salient is the question of whether or not employers can discriminate against them, whether they can be tested for marijuana use, and whether they can be fired for using marijuana in their off-time. This is a serious matter that requires serious attention to detail in some states.

Medical cannabis is now available in 33 states, however, the drug is still illegal on a federal level. This divide is the cause of much confusion on the medical marijuana front. Laws may vary from state-to-state, and in some cases from country to county, and even between neighboring municipalities. This is especially true when it comes to employer/employee rights.

In this article, we will attempt to clarify some of the laws and guidelines around this issue.

This recommendation for medical cannabis falls under the Health Insurance Portability and Accountability Act (HIPAA), meaning your information is protected and will not show up in a background check by your employer or potential employer.

Your state’s Medical Marijuana (MMJ) application should NEVER display your pertinent, personal information, such as your social security number, name or address. It should provide a special ID number to indicate validity.

The MMJ card should display dates of issue and expiration, a passport-style picture, name of the state, and your number. In some states, Illinois for example, the card will contain your address and date of birth.

Have some states disallowed MMJ testing for employees?

Can an employer deny employment based on a positive drug test for cannabis, even if it is a state-sanctioned prescription? Sadly, in many states that would be a resounding, “yes, they can.”

In California, the Supreme Court’s decision on statewide legality applies only to criminal prosecution, not your place of employment, or potential employment. The same rules apply to medical marijuana patients in Colorado as well, even if the employee was ingesting cannabis in his off-hours.

A small number of states have introduced policies addressing discrimination of medical marijuana patients. Most states with legalized medical cannabis leave drug testing up to the discretion of the employer. Even fewer states ask employers to accommodate the needs of medical cannabis patients.

In New York City, as of May 10th, 2020 a law now prohibits employers from requiring potential employees to undergo drug testing for cannabis. In Nevada, as of Jan 1, 2020, employers can no longer take action based on pre-employment cannabis testing. In 2020, more states are starting to limit the use of pre-employment testing for marijuana.

The laws in certain states clearly state that employers are permitted to terminate employment for off-duty medical marijuana consumption. Moreover, in states where the rules are nebulous, the courts, in most cases take the employer’s side and allow termination of employment.

Below is a table indicating state laws in regard to Medical and Recreational Cannabis Anti-Discrimination. This table includes statutory language utilized by each state, indicating the requirement that employers neither discriminate or refuse employment to an individual qualifying for a Medical Marijuana license. It is wise to contact an employment lawyer to determine the specific laws in your home state.

Can employers discriminate if MMJ affects an employee’s job performance?

In many cases, employers may not terminate or deny employment based on positive drug test results, if medical marijuana patients are not:

Most states do not expect employers to provide special accommodations for medical marijuana patients due to their medical condition. The employer is not required to modify the workplace conditions or duties of the employer if he/she is a medical cannabis patient.

In Nevada, the employer is expected to make reasonable accommodations for the medical cannabis patient and their specific medical needs. For more information, see the table of states displayed above.

If there is strong indication of intoxication while on the job, the employee may be made aware of the company’s substance-abuse policy and be willing to take a drug test.

Many states allow employers to terminate employment for off-duty consumption, and to initiate a zero-tolerance drug policy.

Below is a list of states with medical marijuana employment laws provided by NOLO.com. Click on one of the states to learn more of its policies around cannabis.

If your state is not on the list, it has no laws concerning medical or recreational marijuana and employment.

Studies on marijuana and employee rights: