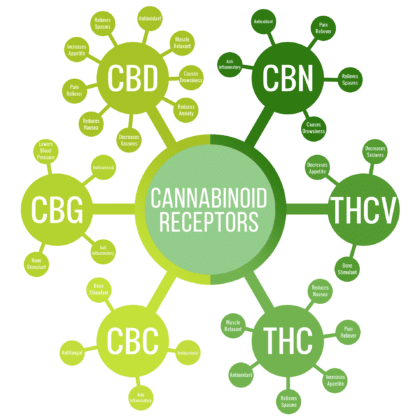 The truly astounding cannabis plant has been sorely misunderstood for the past century. Encouragingly, as more and more research gets underway into the workings of the active compounds in medical marijuana — known as cannabinoids — the plant is becoming better understood and more mainstream. More and more individuals are discovering the many healing aspects of the cannabis plant and finding relief from countless, painful, often incurable conditions.

Medical marijuana is now legal in many U.S. states, in spite of its prohibitive Schedule I categorization by the federal government. Over the past four decades, several clinical trials have highlighted marijuana’s potential for providing benefits such as being an antiemetic (anti-nausea), analgesic (pain relief), antispasmodic, antioxidant, anti-inflammatory, and much more.

Cannabinoids, once cloaked in mystery, have, over the last fifty years, become one of the most researched compounds worldwide. As medical marijuana becomes increasingly popular, it’s harder to ignore the reams of clinical and anecdotal evidence. However, there is still much speculation as to exactly how and why cannabinoids interact with the multiple systems of the human body.

Cannabinoids are active compounds produced by the flowers of the female cannabis plant. Many modern cannabis strains are capable of producing up to 28 percent cannabinoid content by weight. This high cannabinoid content is the direct result of decades of breeding and experimentation by cannabis growers.

More than 80 cannabinoids are produced in marijuana. The levels of each cannabinoid can differ within each unique strain. For example, one of the most common cannabinoids is CBD or cannabidiol. While CBD is plentiful in some strains of marijuana it’s virtually non-existent in others.

THC and CBD are the two compounds receiving the most researcher attention these days. However, other less abundant cannabinoids exist that might rival THC and CBD in their healing capabilities in some cases.

Raphael Mechoulam, a professor at the Hebrew University of Jerusalem, first identified cannabinoids in 1964. He was attempting to determine the precise cause of marijuana’s mood-altering effects when he stumbled upon delta-9-tetrahydrocannabinol (THC). Mechoulam coined the term “cannabinoid.”

It took researchers another 25 years to even begin to understand the workings of THC, and its relationship to the human endocannabinoid system. The ECS was discovered by researcher Miles Herkenham at the National Institute of Mental Health. The research determined that the human body was capable of producing its own cannabinoids which were dubbed “endocannabinoids.” Anandamide was the first endocannabinoid to be isolated and was subsequently identified as the compound responsible for “runner’s high” and for modulating moods and anxiety levels.

The endocannabinoid system has received an enormous amount of attention. There have been numerous studies into how the ECS is affected by the phytocannabinoids found in marijuana. But we still have a long way to go to fully understand how this system of cannabinoids and receptors functions.

How do cannabinoids work? 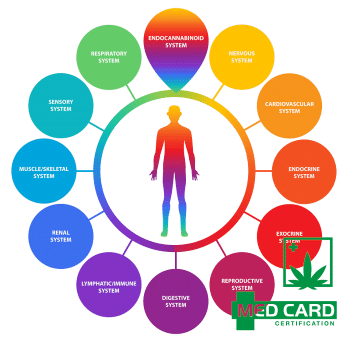 The endocannabinoid system consists of a complex network of signaling molecules and receptors found throughout the human body. These receptors can be thought of as microscopic sockets on cell surfaces that interact with cannabinoids.

In addition to interacting with the ECS, cannabinoids also have powerful antioxidant properties and are believed to be three times more potent than vitamin C. Cannabinoids also possess anti-inflammatory qualities similar to aspirin. Properties such as antibiotic, antifungal, and antiviral have also been attributed to cannabinoids. 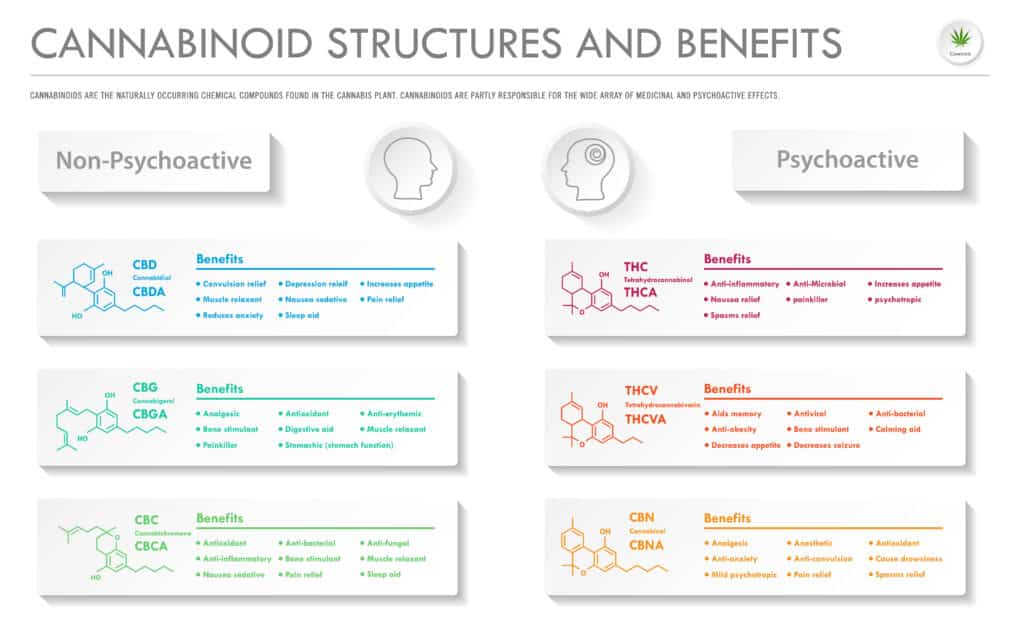 This psychoactive compound named delta-9-tetrahydrocannabinol is well-known for its ability to induce a state of euphoria. Some of the conditions and disorders that may benefit from THC administration are Parkinson’s Disease, cancer, Alzheimer’s disease, Crohn’s disease, Multiple sclerosis, and many more.

Cannabidiol is the second most prominent cannabinoid. CBD does not produce any intoxicating effects. Products such as CBD oil are derived from hemp and can be purchased over-the-counter throughout the U.S. Many states with limited medical marijuana programs allow the possession and use of CBD isolates and concentrates with very low THC content. CBD oil has been used to treat psychotic disorders, chronic pain, diabetes, epilepsy, cancer and depression, and a host of other debilitating conditions.

The third most common cannabinoid derived from the marijuana plant is Cannabichromene. This non-psychoactive compound is known to have anti-inflammatory effects, especially when taken in conjunction with THC. CBC also has anti-fungal, anti-tumor, and antidepressant properties in addition to being a potent neuroprotectant.

When THC in marijuana is exposed to the elements such as heat and air it can break down into cannabinol. Non-psychoactive, CBN can act as a pain reliever, sedative, antibiotic, anti-asthmatic, and an appetite stimulant. CBN is also believed to be an effective treatment for glaucoma.

CBG or cannabigerol is a non-psychoactive compound that develops early in the growth cycle of the cannabis plant. It has been utilized in pain relief, as an antidepressant, as well as an antibiotic. Cannabigerol is also believed to be effective in treating psoriasis, as well as for exhibiting anti-tumor properties.

Tetrahydrocannabivarin contains approximately 20% of the psychoactive effects of regular THC. This cannabinoid may have the ability to repair the damage to the brain inflicted by long-term heavy use of standard THC. THCv is widely accepted to have neuroprotective and anticonvulsant properties. In laboratory studies on mice, it has indicated an ability to cause weight loss in mice.

Cannabidivarin is a slightly less potent version of cannabidiol (CBD). This gentle cannabinoid may, in addition to being anti-epileptic have anti-nausea properties.

Similar to delta-9-THC, delta-8 has both anti-anxiety and neuroprotective qualities, as well as being anti-emetic (nausea) and an effective appetite stimulant. Delta-8-THC is not found in raw cannabis flowers. It is produced from CBD using an industrial process.

Both CBDa and THCa are compounds found in raw cannabis plants. If these cannabinoids are heated they convert to delta-9-THC and CBD. In their raw form, THCa and CBDa exhibit many of the same properties as do THC and CBD such as having antioxidant and anti-inflammatory qualities, but without the intoxicating effects of THC.

What are synthetic cannabinoids?

GW Pharmaceuticals Sativex currently is not available in the US but has been approved in 25 other countries around the world. It is utilized in the treatment of spasticity from Multiple Sclerosis. This synthetic cannabinoid medication comprises both synthetic THC and CBD. Sativex is delivered via a spray nebulizer.

Dronabinol is the pharmaceutical name of the synthetic THC used as appetite stimulants and for the relief of nausea symptoms in chemotherapy and AIDS patients. Two commercial forms of dronabinol — Marinol and Cesamet — are available in oral capsule form.

Some synthetic forms of cannabinoids are extremely dangerous, and on occasion have proved to be lethal. These so-called cannabinoids have been made to specifically bind to the same endocannabinoid receptors that are triggered when ingesting real cannabis. These products are marketed as “herbal incense” or K2 or Spice. They are considered to be some of the most dangerous substances on the black market.

In 2017, a review of multiple studies on SCRAs reported that these synthetic cannabinoids can cause a number of chronic and acute adverse effects, far more dangerous than regular cannabis. After smoking a toxic blend, 130 individuals were hospitalized in New York in 2016. Some of the negative effects reported from the use of these products include seizures, anxiety attacks, organ failures, and even heart attacks.

In contrast to synthetic cannabinoids, the cannabinoids produced naturally in medical marijuana are considered to be safe, well-tolerated, non-toxic, and non-addictive. There are no reports of anyone dying from an overdose of marijuana.