How To Keep Marijuana Away From Children

As the prevalence of recreational and medical marijuana has been growing in America so have the number of cases of children being rushed to the emergency room as a result of consuming marijuana — most often because the child believed the medicine was candy.

How to lock down your weed. In this post, we’ll discuss:

You might think that keeping children safe from medical marijuana and cannabis-infused products would be a “no-brainer.” However, the number of cases of children (and also pets) who have accidentally consumed medical marijuana is rising fast.

Sadly, along with the rise in the prevalence of marijuana and other cannabis-infused products, the number of children accidentally consuming these products is also on the rise.

How bad is the problem?

BMJ medical journals reported on a study of the prevalence of cannabis in homes with children ages 1–14 in Colorado. The study was conducted over the course of three years from 2014 to 2017.

Although about nine out of ten adults who admitted to having cannabis in the home reported that the drug was stored safely out of reach of children, only seven in ten claimed to keep their drugs in a securely locked container, cabinet, or drawer.

Interestingly, households with higher education levels turned out to be less likely to store their drugs in a locked container or hidden away, (This might be because many educated adults know that cannabis — unlike alcohol, tobacco, and many prescription drugs — is non-toxic.)

This problem doesn’t only apply to homes with kids. Oftentimes it’s someone else’s kids (or pets) who discover and consume what looks like a treat. And even if the products do not look like candy or cookies, older kids who know very well what they’re looking at might be tempted to steal a bud or some cannabis concentrates for experimental purposes.

Moreover, exposing someone else’s children to any prescription medication or controlled substance can potentially result in criminal charges and/or costly financial liability. 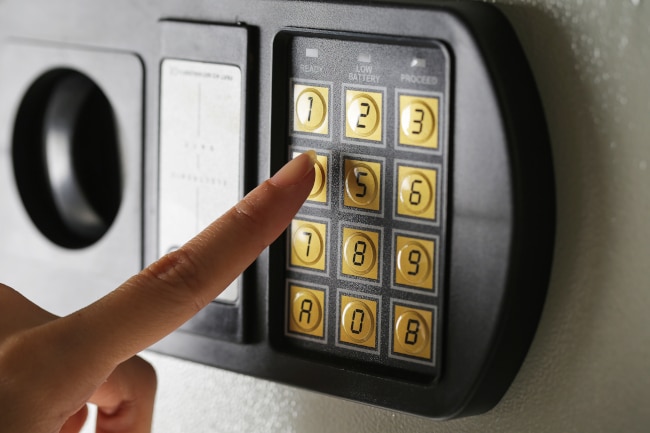 What’s being done to prevent the problem?

Many states with legal cannabis invest some of the tax revenue into public education programs designed to encourage adults to keep their drugs safely tucked away. However, these programs don’t appear to have a widespread effect.

Recommendations for Protecting children from marijuana

Let’s face it. Kids can be sneaky. While most are taught to ask for permission to eat things like candy and cookies, very few can be trusted to not do so behind their parents’ or guardians’ backs.

Here are some specific tips for keeping marijuana — or any dangerous drug or chemical, for that matter — safely away from children.

How to tell, and what to do if a child has taken your marijuana

Although severe cases with life-threatening consequences are extremely rare, finding a child in a state of intoxication can be a scary (and often costly) event for many parents. So it’s important to know the signs that a child has accidentally consumed marijuana products (or anything toxic) and what course of action should be taken.

It’s generally not difficult to tell when a young child has consumed cannabis. This is because even small amounts of THC (the intoxicating compound in marijuana) can have big effects on a little body with no prior tolerance buildup. Furthermore, CBD and other non-intoxicating cannabinoids can also affect children adversely.

Signs that a child has accidentally consumed cannabis:

If a child is experiencing any of these symptoms, a local or national Poison Help Center should also be called immediately. The child should also be examined by a medical professional as quickly as possible. The healthcare provider should be informed of any marijuana products, medicines, or toxic substances to which the child might have had access.

Talk to your children about marijuana and other drugs

One final piece of advice: Parents and caregivers should make time to discuss medicine safety with kids and to make it clear that, even though medicine is used to help sick people, many drugs are potentially harmful and even poisonous to healthy people. And make it clear that drugs aren’t just made into pills and syrups. They also sometimes take the form of candy or baked goods.

Kids should be taught that all candy and other goodies should be considered to be a drug unless otherwise expressly informed by an adult.

The national Poison Help Center number is 800-222-1222. All parents should keep this number or a local poison helpline stored in their phone or posted in a prominent location in case of emergency.