Can patients with a medical marijuana card buy or own guns? If the majority of Americans had their way, the answer would be yes. However, the federal government says otherwise. In this post, we’ll talk about why federal gun laws trump state laws as they pertain to medical marijuana use and gun ownership.

In the past few years, more than two-thirds of U.S. states have embraced the legalization of medical marijuana. Millions of Americans are now finding medical marijuana to be an effective method of alleviating the symptoms of a wide variety of medical conditions including Parkinson’s disease, ALS, MS, PTSD, chronic pain, and cancer. And the trend continues as the vast majority of Americans favor legalizing marijuana at the federal level.

In recent months a global pandemic, as well as racial and political tensions, have resulted in a nationwide spike in demand for guns. Ironically, as the sale of both guns and marijuana skyrocket, many marijuana users are shocked to discover that gun ownership and marijuana use don’t mix.

Many Americans are passionate about their Second Amendment right to bear arms. This passion is reflected in the large numbers of legal gun owners in the U.S. According to a 2018 Small Arms Survey, out of the one billion guns purchased for personal use globally, 46 percent (393 million) are in the hands of U.S. civilians. And the numbers are growing daily.

The fact is, however, it’s a federal felony to own a gun and use marijuana. Moreover, using marijuana medically or recreationally automatically makes the purchase, ownership, and transfer of guns a high-level federal violation with penalties of up to $250,000 fines and ten years in federal prison.

More than two-thirds of U.S. states have legalized marijuana in one form or another. And more than half of U.S. citizens now live in a state with legal marijuana. Putting aside federal law for a moment (since every state that has legalized marijuana has done the same), the requirement to relinquish guns or gun permits varies from state to state.

Some states, such as Texas, Pennsylvania, Illinois, and Hawaii required gun owners to relinquish their weapons upon obtaining a medical marijuana card. Other states, such as Florida are not as stringent with their regulations.

Texas recently expanded its medical marijuana program to accommodate patients with several qualifying conditions. State Rep. Stephanie Klick is one of the Compassionate Use Act authors. She’s also a gun advocate. Klick claims that she wrote the Compassionate Use Act with seriously debilitated patients in mind. Klick says she is doubtful that patients suffering from such debilitating conditions will want to buy guns.

“These are very sick people,” she said. “People with spasticity have mobility issues. People with ALS over time will become ventilator-dependent. They’re not going to go out and buy guns.”

However, Texas director for Gun Owners of American, Rachel Malone begs to differ. “To tell Texans you can’t purchase a firearm if you have a compassionate use card is unconscionable,” said Malone. “We should not force people to choose between gun ownership and taking care of themselves.” 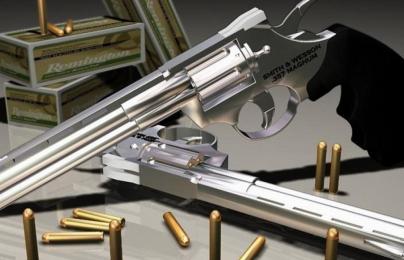 Alternatively, in Florida, if a patient is already in possession of a gun or holding a concealed weapon permit when obtaining a Florida medical marijuana card, they are not required by the state to relinquish them.

Unfortunately, when it comes to guns, medical marijuana patients are at the mercy of the federal government — not the state government — until marijuana is no longer categorized as a Schedule I Controlled substance.

Regardless of what state a patient resides in, if a federal agent finds marijuana or a medical marijuana user in possession of a gun, they could be in boiling hot water. Recreational users of marijuana should also take note, as these federal laws apply to all marijuana users.

VIDEO: Can you smoke weed and own guns? - The Legal Brief

In order to purchase a gun in the U.S., buyers must fill out a federal background check application. On the form, buyers are asked if they use or are addicted to “marijuana or any depressant, stimulant, narcotic drug, or any other controlled substance.”

The application goes on to state, “Warning: The use or possession of marijuana remains unlawful under Federal law regardless of whether it has been legalized or decriminalized for medicinal or recreational purposes in the state where you reside.”

If medical marijuana patients answer truthfully, gun dealers are forbidden from selling them a gun. And if the buyer lies, and it’s discovered that they lied, they are committing a crime punishable by up to 5 years in prison.

Moreover, anyone who already possesses a gun and uses medical marijuana is in violation of Title 18, United States Code, Section 922. A conviction comes with up to 10 years in prison and up to $250,000 in fines.

Furthermore, if the buyer was convicted for possession in the past 5 years, or tested positive for a controlled substance within a one year period they are also forbidden to purchase a gun. Due to patient’s rights laws, federal agencies are unlikely to discover marijuana use during the background check (unless the person has made the information public). However, drug convictions will be uncovered by federal agencies.

What if you already own a gun?

Gun owners and sellers who get their medical marijuana card after buying a gun need to know their rights and responsibilities.

Here are the main points gun owners need to take into consideration when applying for a medical marijuana card or going on record as a recreational marijuana customer.

Medical marijuana patients (and recreational users) are automatically banned from the use, possession, purchase, and transferring of guns.

Furthermore, if a private gun transaction takes place and both parties are aware of the gun recipient’s use of medical or recreational marijuana then both individuals could be charged with a federal felony.

Additionally, gun owners with an immediate family member in possession of a medical marijuana card are prohibited from sharing gun safe combinations or allowing said family member access to weapons.

Will the situation change in the future?

The declassification of marijuana as a Schedule I substance is long overdue. In fact, more than two-thirds of Americans are in favor of federal cannabis policy reform. And their numbers are rising.

However, until the Federal marijuana laws catch up with the states, the gun ownership issue will continue to plague medical marijuana patients.

Although the marijuana/gun issue has been challenged in several states, the ATF will maintain its stance until marijuana is no longer considered a Schedule I substance.

In a 2016 case, the U.S. Ninth Circuit Court of Appeals ruled that the argument that medical marijuana patients are unlikely to commit violent gun crimes is “not sufficient to overcome Congress’s reasonable conclusion that the use of such drugs raises the risk of irrational or unpredictable behavior with which gun use should not be associated.”

The good news is that Congress has been making some promising headway with legislation that would reschedule marijuana or have it completely de-scheduled. And that progress is likely to accelerate now that Democrats have wrested control of the Senate from the Republicans.

Will President Joe Biden sign off on the legalization of marijuana? That depends on the legislation. He’s much more likely to sign a bill that decriminalizes marijuana.

For the time being, the guns and marijuana debate continues. However, advocates are optimistic that the issue will be settled in the near future.