Will Trump legalize marijuana on a Federal level? 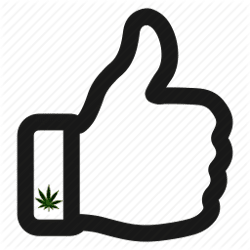 One of our readers wants to know: “Will President Trump will legalize marijuana on a federal level?”

We’re sure many of you are chomping at the blunt to get an answer to this question as well. Let’s examine what we know so far.

A little back story on marijuana legalization efforts

If you had told someone back in the year 2010 that within 10 years marijuana would be legal for recreational use in at least 11 US states and the District of Columbia, a lot of folks would have called you delusional. Nonetheless, going on 2020, that’s exactly where we find ourselves, with Illinois recently becoming the 11th US state to end the prohibition of marijuana.

Furthermore, we now have 30-something states in which medical marijuana is more or less legal, including former zero-tolerance conservative states such as Florida, Ohio, and even Texas (to some extent) have open dispensaries. More than half of US citizens now live in states where marijuana is legal in some form or another for medical patients and/or adults.

HOWEVER, even if you have a medical marijuana card, if you buy and use marijuana in ANY state or territory of the US of A, you are, in fact, breaking the law.

Wait. What? How can that be? The twist, as you’ve probably guessed, is that marijuana is still illegal on the federal level, so you would be breaking federal drug laws. Even in states where marijuana is legal, you can be arrested if you’re caught with pot on federal property, such as while visiting a national park.

More specifically you’d be drawing the ire of the US Drug Enforcement Agency which has essentially put marijuana at the top of its list of controlled substances. Marijuana is considered to be a Schedule I controlled substance on par with heroin, cocaine, and LSD, having zero medicinal value and supposedly a high risk of addiction.

It was almost a century ago that the US federal government went to war on cannabis users. The main talking point was that marijuana turned people into homicidal maniacs. That’s powerful stuff. The propaganda campaign was so effective that it’s taken nearly a century to begin to peeling away the falsehoods attributed to marijuana.

Today, of course, it’s common knowledge that cannabis has a great deal of medicinal value and that the risk of addiction is low – especially when used to treat short-term medical conditions such as pain due to an injury. So, what’s the holdup? Why is pot still federally illegal? And what are the prospects of the feds becoming 420-friendly any time soon?

This is where Trump comes in. President Donald J. Trump, of all people, just happens to be the very first president of the United States of America to support the legalization of marijuana on a federal level – to some extent.

Even before Trump was crowned the Republican party’s presidential nominee, he had hinted that he supported the State’s right to regulate cannabis without federal interference. For the most part, that has been the policy up until now, anyway. (The Obama administration had a hands-off policy regarding states with medical marijuana programs.)

Although he has not come out and called for major cannabis policy reform, there have been some hints that should a legalization bill come across his desk, he just might actually sign it.

For one thing, Trump has been extremely critical of the pharmaceutical industry and knowing that it would cost them billions, legalizing pot just might be his way of sticking it to them.

For another thing, as witnessed by his willingness to beef up import tariffs, Trump has shown that money talks when it comes to setting federal policy. He’s well aware that legal cannabis has created billions in commerce and tax revenue in states where weed is legal. This, in turn, takes money out of the pockets of cartels and puts into the federal war chest via income tax revenue.

Trump is also well aware of the massive growth potential of the cannabis industry which is by one estimate predicted to bust the $75 billion mark worldwide by 2030. In September 2018, Barclays, in its European Consumer Staples Report, estimated that the total industry could be worth $272 billion by 2028. That kind of money talks — loud and clear.

While that’s not a bold-faced endorsement for legalization, it does show that his administration is purposefully maintaining the hands-off policy that began under the Obama administration.

But will Trump sign legalization legislation if it reaches his desk?

Sen. Cory Booker of New Jersey is a vocal proponent of federal cannabis policy reform. He has introduced a bill that would remove marijuana from the Controlled Substances Act. Booker claims that in meetings with President Trump, the POTUS expressed his willingness to sign a marijuana bill.

What would Congress do?

Even if the Whitehouse is 100 percent behind legalization, short of an executive order, it will still be incumbent upon Congress to change the laws. So, if any legalization effort is to be successful it’s going to have to come from the House.

There have been numerous efforts by US lawmakers to develop legislation to reschedule or down-schedule cannabis, however, so far, all attempts at bringing cannabis legalization bills up for a vote in both the House and Senate have been blocked by the Republican party leadership.

That is until the Dems took back the House. Since then there has been a flurry of activity on this front. Although the House recently passed the SAFE Banking bill which, if signed by Trump, would allow banks to do business with cannabis companies, the bill does not change marijuana’s Schedule I status.

Furthermore, whether or not the legislation might clear the Republican-controlled Senate and make its way to the president’s desk is questionable, to put it nicely.

Co-sponsors of Booker’s previously mentioned bill include 2020 presidential contenders Sens. Elizabeth Warren, Bernie Sanders, Kamala Harris, all of whom have a good shot at the Democratic nomination.

What this means is that even if Trump is defeated, there is a good chance that another proponent of legalization will sit in the Oval Office come January 2021.

Unfortunately, the current Democratic front-runner, Joe Biden, is considered by activists to be the worst candidate of the bunch when it comes to marijuana reform, however, that doesn’t mean that he would not sign a cannabis bill that had been passed by both the House and the Senate.

Along with some of these good omens, however, it’s important to point out some recent not-so-great omens.

At the end of August, the US Surgeon General issued a national warning spelling out some of the dangers associated with marijuana use. At the announcement, Health and Human Services Secretary Alex Azar labeled marijuana “a dangerous drug.” And here’s the kicker: Officials said President Donald Trump, himself, had donated $100,000, or one-quarter of his annual government salary, to fund a campaign to raise public awareness of the risks.

That doesn’t mean that Trump would not sign the bill, but what it does show is that  to some extent Trump has bought into Reefer Madness.

The bottom line, for now, is that, unless Democrats take back the Senate in 2020, it’s unlikely (but possible) that both the House and the Senate will pass a real pot bill. And we have seen no effort by the executive branch to take the necessary steps to end federal prohibition. Right now the Whitehouse has far more pressing matters to deal with.

There is a growing glimmer of hope that the federal government will end its prohibition of marijuana in the not-too-distant future.