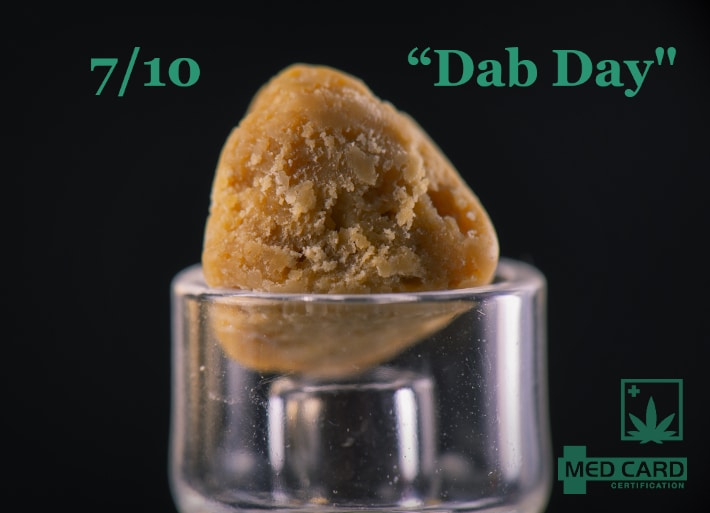 What is a dab? Why is July 10th Dab Day? Is dabbing safe? Have fun but be responsible.

I think everyone is now familiar with the 420 holiday. If you haven’t seen our article on the origin of 420 and why it is not just a joke holiday, you should read it here.

Well, move over 420. Now there’s a new stoner holiday on the block.

Before we talk about Dab Day we need to know what a dab is.

Various types of cannabis concentrates all have one thing in common — they are all made with cannabinoid-rich and terpene-rich oils that are extracted from marijuana buds. The extract then goes through a series of filtration, distillation, and evaporation steps to produce concentrates.

Each type of concentrate goes through a slightly different production process that we won’t get into here. Check out this article on concentrates for a deeper dive.

One hit off a dab rig or pipe can provide several times the THC — or other cannabinoids — provided in one toke of marijuana flower. In fact, one dab might even provide more THC than smoking a whole joint by yourself.

So you can see why dabbing is popular with hardcore stoners. Actually, not just hardcore stoners but also medical marijuana patients suffering from an array of debilitating medical conditions.

Why do dabs have their own day?

Okay, now we know what a dab is.

But why is July 10th of any particular significance? Unlike the fascinating story of the origin of 420, the explanation for 710 is a lot more mundane.

And here it is. Drumroll.

You most likely haven’t heard of 710. That’s because, before this year, the meme was just starting to bubble up. This year, 2021, is the first year that “Happy 710” has been trending on Twitter.

With the rising popularity of 710 — Dab Day — the popularity of dabs is also expected to be on the rise. But how safe is dabbing?

There’s some good news and some bad news for holiday goers.

First of all, the good news is that there are no records of anyone ever dying from an overdose of THC — or any other cannabinoid for that matter. Falling asleep maybe.

So, in that sense, dabbing seems somewhat safe.

On the other hand, drug abuse is a real thing. Doing dabs on a daily basis can cause all sorts of problems — that is aside from burning a hole in your wallet — the stuff’s not cheap.

Among other things, dabbing can result in chronic asthma or bronchitis. And excessive consumption of THC can also result in short-term anxiety and paranoia and even long-term mental illness.

The human endocannabinoid system or ECS is responsible for managing all sorts of bodily functions like appetite, mood, sleep cycles, pain response, immune response, and much, much more. Flooding the system with the phytocannabinoids in marijuana essentially breaks the ECS.

For someone who is sick, supplemental cannabinoids might boost the ECS. However, relief almost never requires the instantaneous consumption of a ton of THC. Sometimes even marijuana microdosing will do the trick.

Furthermore, driving or operating heavy machinery — or even just walking — while whacked out of your gourd significantly raises the chances of getting into an accident and being injured or having your butt thrown in jail.

Also, although THC isn’t technically addictive, it can be habit-forming. And chronic pot smokers can become addicted not to the cannabinoids but to the dopamine and serotonin rushes that come with it. Some experts will call that distinction splitting hairs. 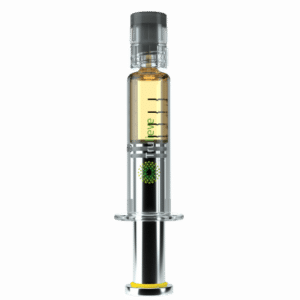 Have fun but be responsible

We’re not trying to tell everyone to avoid dabbing altogether. When done in moderation it can be a catalyst for good times. But when dabbing is all about getting the next big buzz, and the next one, and the next one, day after day, there will ultimately be some kind of consequences to pay.

If anything, 710 will be a day that everyone who is into dabbing can save some money. It’s likely that as the “holiday” becomes more prominent, marijuana dispensaries will offer special deals on dabs.

Finally, let’s end this by pointing out that dabs might be illegal where you live — even in some states with medical marijuana programs. And some states limit THC levels to anywhere from one to five percent (which takes all the fun out of dabbing).

In some states including Ohio, Missouri & Florida, you’ll need a medical marijuana card in order to purchase concentrates. In others like Mass or Illinois — 19 total — anyone 21 and older can shop at local marijuana dispensaries.

And, don’t forget, CBD, CBG, CBN, and other cannabinoids found in hemp flower are legal in almost every state. Just about anyone can buy CBD dabs online and have them delivered to their home without a medical marijuana card and without fear of spending time in prison — but also without the euphoric high.

It remains to be seen whether or not 710 — July 10th — aka “Dab Day” is just a Hallmark holiday made for selling more cannabis concentrates or if it will turn into something more serious.