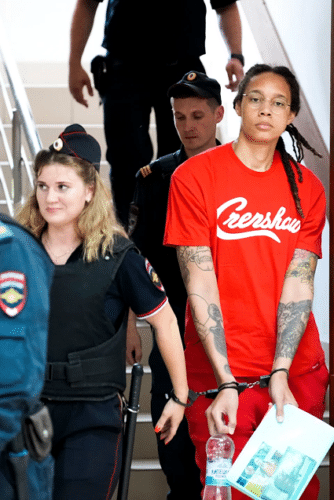 In a shocking turn of events, two-time US Olympic basketball gold medalist, Brittany Griner has entered a guilty plea in a Russian court for charges of drug possession and smuggling. The international basketball star was arrested at the Moscow airport last February when officials discovered cannabis oil in her luggage. She now faces up to a 10-year prison sentence. However, Griner’s defense team stated that they are hopeful the guilty plea will earn some leniency.

Griner has been charged with smuggling cannabis oil into Russian territory. Reportedly she was carrying less than one gram of the oil. She claims to have mistakenly placed the illicit substance in her backpack prior to leaving the U.S. According to her defense team, samples taken from Griner indicated no trace of any illegal substance, adding “She was clean, and she was tested,” the lawyer said.

The lawyers were quick to point out the guilty plea was Griner’s decision, adding that she “sets an example of being brave.”

“She decided to take full responsibility for her actions as she knows that she is a role model for many people. Considering the nature of her case, the insignificant amount of the substance, and BG’s personality and history of positive contributions to global and Russian sport, the defense hopes that the plea will be considered by the court as a mitigating factor and there will be no severe sentence.”

Griner, making a statement through an interpreter, told the court she had not meant to commit a crime or to carry cannabis in her luggage, and the oversight was a result of packing in a hurry.

Russian courts have a frightening 99 percent conviction rate in cases like these, probably making the decision to plead guilty a wise one that could effectively result in a much shorter sentence.

Griner’s next hearing is set for July 14th, and the trial is expected to be wrapped up by the beginning of August.

With the recent events in Ukraine and the US’s ongoing support for the country, some advocates are concerned that Griner is being used as a political pawn to be used in a prisoner swap. This would actually be the best-case scenario for Griner — that is assuming the deal goes through. U.S. veteran Trevor Reed was released from the Russian prison system after being detained in the country for three long years.

Russian officials have denied that there is any intention to politicize Griner’s case. Spokesman Alexei Zaitsev of the Foreign Ministry maintains that she broke the law and the evidence against her is “indisputable.”

“Attempts to present the case as if the American was detained illegally do not hold up,” Zaitsev said, according to the AP. “The law has been violated, and arguments about the innocent nature of Griner’s addiction, which, by the way, is punishable in some U.S. states, are inappropriate in this case.”

Many American officials beg to differ and believe Griner is being “wrongfully detained” — a term known to escalate diplomatic strategies and implement a release.

There have been multiple grassroots protests across the US, as well as a petition for Griner’s release on Change.org, that surpassed 310,000 signatures. Additionally, many prominent politicians, celebrities, and high-profile athletes are speaking out and standing up for Griner.

The global support for her is not at all surprising. Griner is a highly recognizable athlete, widely respected, and universally beloved. Sadly, in spite of Griner’s celebrity status, she is a black, gay woman, and in many regions (including some states in the U.S.), she would likely be subjected to disproportionate sentencing. Historically speaking, the penalties for cannabis possession are much harsher in many foreign countries as well as in marginalized communities here at home.