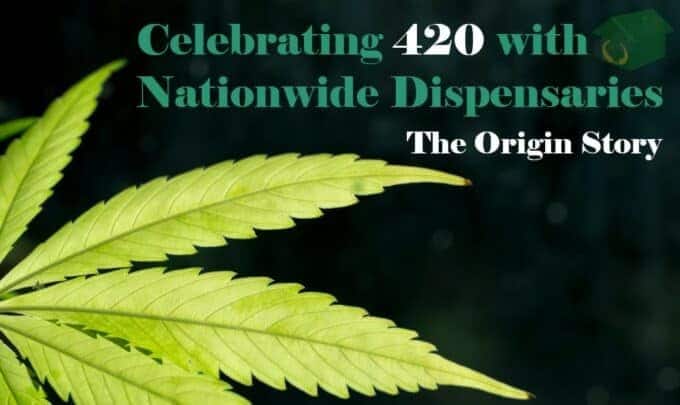 Every Christmas, every Easter, every Passover, every Independence Day, every major holiday has its origin story. And this story is told year after year on the sacred day. The birth of Christ, the Resurrection, the signing of the Declaration of Independence — each of these events marked a turning point in the history of humankind. 420 is no different-ish.

Pot, too, has a holiday. Whether or not an outsider considers it of less importance than a religious holiday is irrelevant. The annual holiday was set long ago — April 20th (4/20). And the story of the origin of the holiday will be told year after year after year for many decades or possibly even centuries to come.

For many marijuana enthusiasts, weed is a religion — or at the very least a rebellion. Marijuana symbolizes the continuing fight for liberty and the pursuit of happiness for all mankind on God’s Green Earth.

And like many religions, the faithful carry on their business in secret, out of sight of law enforcement and potential whistleblowers (aka narcs).

Like the apostles and evangelists of old, marijuana users have rejected the immoral law of the land and risked imprisonment. In America, over the past century, there’s been nothing short of an Inquisition by the DEA. Some marijuana advocates have all but been burned at the stake, their lives and those of their families and communities left in ruin.

In an attempt to evade political persecution, many rebellions adopt secret codes.

Here’s how the story goes… As with any origin story, over the years the details might change, but the gist of the story is this:

Back in 1971, five high school students from San Rafael, California, began meeting each day for an afterschool toke break at a location just outside a wall on school grounds. The five students called themselves the Waldos. (Get it? Wall-dos.) They would meet at the foot of the school’s Louis Pasteur statue at 4:20 each day. The secret code that a meeting would take place on a particular day was the phrase, “4:20 Louis.”

Over the eons that have elapsed since that time, 4:20 — or simply 420 — has become the code word for weed and for the movement that surrounds it. And now April 20th has evolved into a worldwide holiday for the marijuana faithful.

The spreading of the code is attributed to Dead Heads (Grateful Dead followers) who called for 4:20 pm to be the designated hour of the day to partake of the sacrament of the once-evil weed.

On a side note, the most common use case for 420 is the term, “420-friendly,” The term implies that a person is part of the movement. For example, states, where marijuana is now legal for adult recreational use, are considered to be “420-friendly” (at least to some extent). Or a pot smoker looking for a roommate situation on Craigslist will want to make it clear that they are looking for a “420-friendly” situation.

420 is more than just an excuse for marijuana dispensaries to run big sales. Today it has deep philosophical and moral significance. Whether you consider it a joke or not, 4/20/2022 offers ample reason to celebrate.

Over the past half a century, the God-given right to smoke weed for pure happiness or to obtain a medical marijuana card in order to better one’s quality of life has been slowly coming out of the shadows — and basements and attics and closets — of America and becoming accepted by the mainstream. Today, a sizable majority of Americans are against the federal prohibition of marijuana and in favor of putting regulation in the hands of the states where it belongs

U.S. states began snubbing their noses at the federal government’s Reefer Madness mentality back in the late 70s. That’s when California legalized the use of marijuana to treat cancer. Since then, state after state has followed suit until this day where nearly 40 percent of U.S. states offer some form of legal marijuana, and 17 allow adult recreational use. More are sure to follow. Plus there’s a growing contingent in Washington working to end federal prohibition.

Reparations are also being made for the egregious miscarriage of justice that has been perpetrated on the American public in the name of the War On Drugs. Marijuana possession-related convictions are being expunged from public records, charges are being dropped, and in some states, the smell of marijuana alone is no longer a good enough reason for the cops to release the Kraken.

Moreover, many states have been creating additional opportunities and making it easier for entrepreneurs in communities hit hardest by the War On Drugs to pursue prosperity by growing and selling the simple weed that has cost them so, so much over the past century.

The War On Drugs has been a long, difficult war with millions of casualties and a cost of billions of dollars. There are still some battles being fought (for example, it’s okay to buy a firearm if you’re a raging alcoholic, but you can’t have a medical marijuana card and own a gun). And there may still be some skirmishes even after the end of federal prohibition.

But the end of the war is now in sight. And weed is crushing it.

Today more than two-thirds of U.S. states have some form of legal marijuana whether it be medical or both medical and adult recreational use. Just recently, Arizona, Virginia, New Mexico, New Jersey, and Illinois all legalized adult recreational use. Meanwhile, in states such as Florida, Missouri, and Ohio, medical marijuana programs are flourishing. Even in deeply conservative states such as Mississippi, Montana, and South Dakota, voters and lawmakers alike are becoming more 420-friendly.

Nationwide marijuana sales passed the $17.5 billion mark in 2020, up almost 50 percent from 2019. And in states with recreational sales, the percentage of the population that partakes in cannabis has risen from 38% to 43%. Industry analysts expect weed sales to surpass $40 billion by mid-decade.

Up until now, the growth of the U.S. marijuana market has been somewhat constrained with a lack of dispensaries and supply shortages in some of the newer states. But in the vanguard states such as California, Colorado, Oregon, and Washington, the cannabis industry — albeit not free of challenges — is coming out of puberty and coming of age.

In states where marijuana is legal for both medical and recreational use, coffers are gaining a significant boost from marijuana tax revenues. They are also saving a ton of money and human resources previously spent on law enforcement and incarceration.

It’s projected that by 2026 the cannabis industry will be about the same size as the craft beer industry (which took a century to grow to its current size) and about 40 percent the size of the entire alcoholic beverage market.

But this is about more than money, more than economic prosperity, more than an excuse to party. It’s about compassion. It’s truly about freedom, justice, and the American way.

420 is no longer just a code word used to sneak out and join your friends for a toke break. 420 is nothing less than a global celebration of the rise of human rights.

What is Delta 8 THC?